Chassis Manager (CM) is organized around RCM3700 module and comes in two incarnations:

NodeID box is used in both versions to provide additional features. Two serial ports on the RCM3700 provide the RCM3700 console and the host console interface. Another port on the RCM3700 provides I2C clock and data. The CM design is primarily based upon I2C bus components. The I2C (Inter-Integrated Circuit) Bus is a low-cost two-wire, low to medium speed communication bus designed for chip-to-chip communication. I2C was developed by Philips Semiconductor in the early 1980’s, and is commonly found in computers built today. The I2C components used in the CM are summarized in Table 2 below:

The CM has two components: a CM PCI card that connects directly to the host, and a NodeIDBox that permanently mounts on a fixture at each grid position. The PCI CM block diagram is shown in Figure 5. 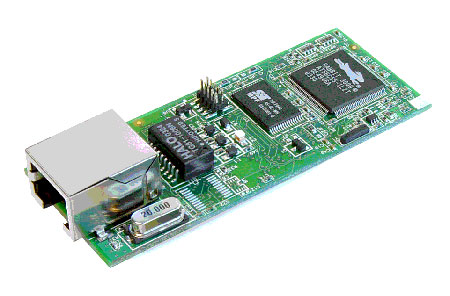 The ​RCM3700 Rabbit Core is the microprocessor based core module designed for Ethernet/Internet applications with the following features:

Note: The Dynamic C TCP/IP library functions are slightly different from Unix syntax, and are not directly portable to non-Rabbit platforms. 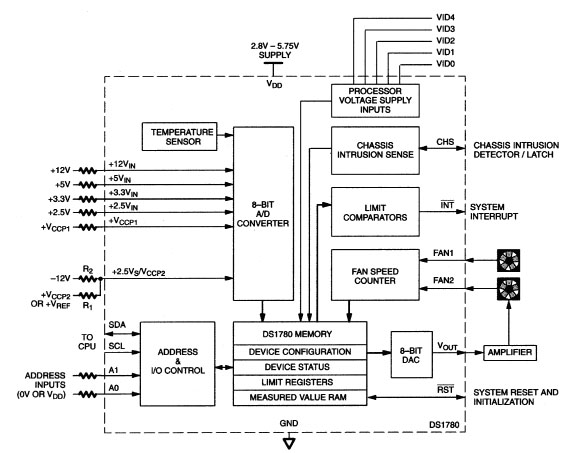 Voltage and temperature monitoring is achieved using the I2C-based Dallas Semiconductor DS-1780. This device is a 24-pin direct-to-digital chassis system monitor. It is capable of monitoring ambient temperature, six power supply voltages, and the speed of two fans. Fan speed can also be controlled from this device using an internal 8-bit ADC. See the DS-1780 Block Diagram in Figure 6. 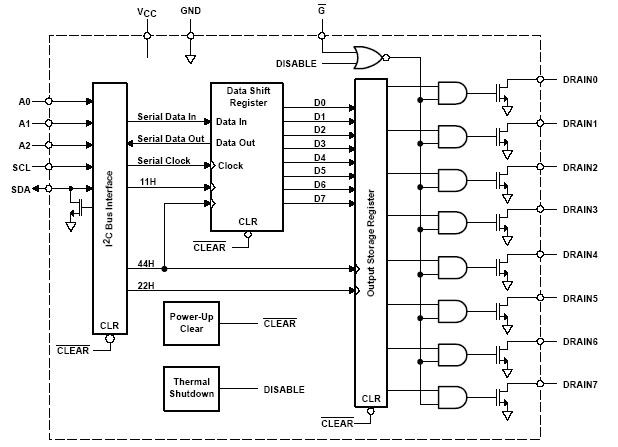 The microprocessor used in the CM, the RCM3700, has a capability of sourcing or sinking only 6.8ma maximum per pin. The TPIC2810 is used to drive higher current devices, e.g. LEDs, and the unknown current requirements of, for example, the Power and Reset signals of an unspecified host. Each output pin on the TPIC2810 can drive 100ma continuous / 210ma maximum using open-drain DMOS transistor outputs as shown in Figure 7. 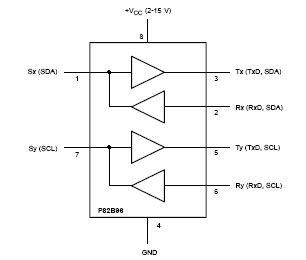 The P82B96 is used to create a non-latching bi-directional logic interface between a normal I2C bus and a wide range of I2C or SMBus configurations at different logic voltage levels. It is used in the CM to bridge between the CM I2C bus and the Radio Node (or other host) I2C or SMBus. The block diagram of the P82B96 is shown in Figure 8. A small circuit disables the P82B96 if either CM or Host power I2C power is not available, thus isolating the unpowered bus. 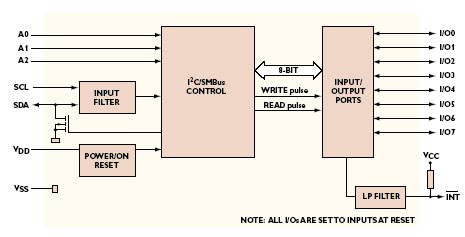 In the NodeId box, the PCA9554 is used for a general purpose 8-bit GPIO expansion on the I2C bus. Each bit can be configured for input or output, and the polarity of each bit can software configured. The drive output on each bit is 25ma maximum, and 100ma over all 8 bits. This device is used to read the N.O. momentary contact switch used to reset the CM, or to send an Identify Message back to the CMC. (The function is dependent upon the duration the switch is held). The PCA9554 is also used to drive the large red LED used to identify the Node. The red LED is driven through a off-chip NPN transistor to allow the LED to operate on a higher voltage and current than allowed by the PCA9554. A small CM status LED is also driven directly by this device. Figure 9 has the block diagram for the PCA9554. 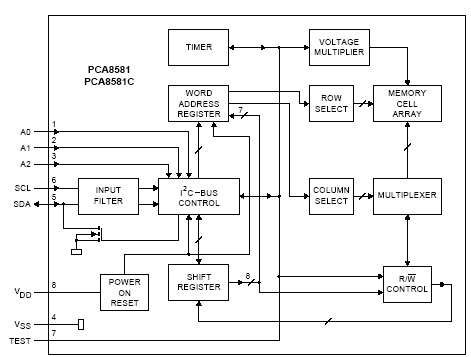 One of the primary functions of the Node ID box is to store the fixed grid coordinate for the node location in the grid. The grid coordinate is used for location information as well as defining the static IP address of the CM, and Host node. The PCA8581 is a 128 x 8b EEPROM with typical word-addressable auto-increment memory access. It is important to note that this device uses all three address pins to define the I2C hardware address, unlike a similar part, the 24LC01, which ignores the three address pins. Having active address pins permits specific placement of this device in the I2C address space to avoid conflict with similar devices in the host system that are sharing the I2C bus over the P82B96 bridge. The PCA8581 is shown in Figure 10 below.

The 256 x 8 PCF8570 I2C RAM device is included in the CM design for future use, and is not used on the initial CM boards. Its design consideration addresses inter-processor communication between the CM and the Host node.

The address assignments of the CM I2C components were selected to avoid address collision with the same class of device on a host system. While this can not be guaranteed for all host systems, those hosts that are likely to be connected to a CM were considered.

The I2C address hard-wired for A2, A1, and A0 on a device represents the least significant 3 bits of a 7 bit I2C address field. The most significant 4 address bits are fixed within each device, and represent the “class” of device. I2C addresses are usually referenced in hexadecimal, but sometimes they are shifted right one bit to have a range of 00…7F. In this text, the right-shifted address is used, and the CM Schematics contain both shifted and non-shifted address notations.

Table 3 below shows the I2C address assignments for three hosts (Tyan, VIA, and Gigabyte) along with assignments used in the CM and Node Id components.