The objective of this demo is to show the federation of the two heterogeneous testbeds: Planetlab and ORBIT. This demonstration illustrates a typical wireless hotspot scenario with one node in the ORBIT testbed fetching video media off a remote Planetlab node and serving it to a fixed and mobile client.

The demo has been choreographed to use nodes 17-2 and 17-7, where 17-2 is the hotspot AP that fetches the media content off a remote Planetlab node pli2.pa-1.hpl.hp.com and serves it to node17-7 as well as the robot based mobile node.

Bitrate (in kbps) is measured by the receiving node and reported to the ORBIT infrastructure using the OML library.

A representative picture of the scenario is shown below 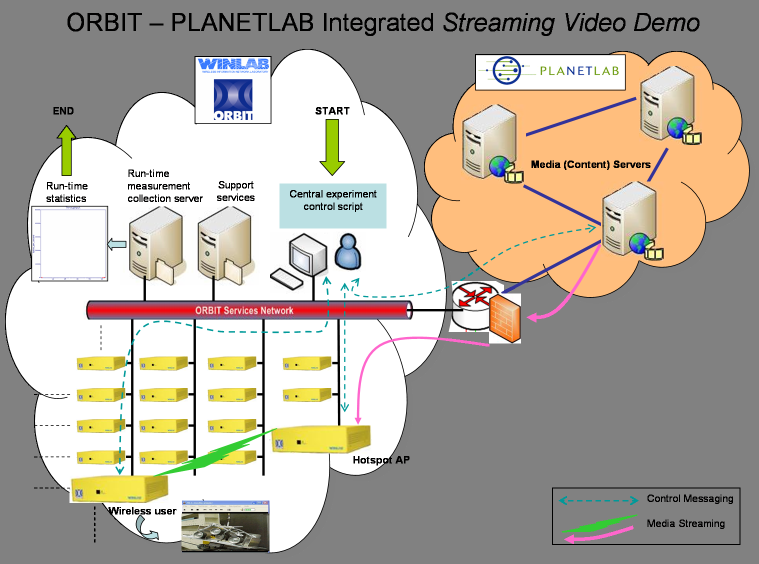 On the display machine, point your Internet Explorer or Mozilla Firefox browser to ​http://internal3.orbit-lab.org/planetlab.html. This page should automatically populate the database name based on the current experiment id, and after selecting bitrate and wireless client, and clicking on Submit, you should be able to see the estimated measure of the bitrate at which the video stream is being played in kbps. Whenever the media content is relatively static, the bitrate is low, when there is more action, the bitrate is higher.

All these nodes currently have the media stream to be served for this demo.