This is the block diagram for the third generation chassis manager. 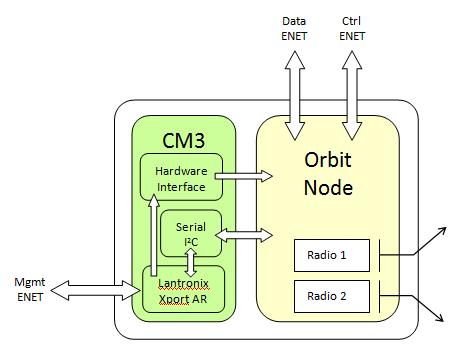 The goal of the third generation chassis management project is to develop a full featured CM platform using the Lantronix XPort AR module rather than he Rabbit RCM3700 as the principle component. The Lantronix Xport AR is an embedded device with Ethernet connectivity, a full API allowing for network programming, and a full featured TCP/IP protocol stack, all in a single package. It has serial communications built it making it easy to implement a Ethernet to serial tunnel and 11 general purpose I/O pins which will act as sensing inputs, and control pins for powering the Orbit nodes on and off, as well as monitoring their status.

The entire CM package uses the Xport AR as the main processor as well as a few additional components to implement the desired functionality. a RS232 level shifter from Maxim IC is used to communicate with the serial port of the Orbit node, two solid state relays to act as software controlled switches to emulate power and reset push buttons. The device will also recognize physical push button presses for power and reset. There is also a computer monitoring chip (as in previous CM versions) that will monitor voltage levels of the node and temperature. This chip communicated over I2C which is also used to communicate with the nodeID box. Both the NodeID box and the monitoring chip require I2C to function, however the Lantronix Xport AR does not support I2C functionality at this point. Should that option become available, it will be added.

The entire CM3 will is small enough to be mounted inside the case of the Orbit nodes and is powered off of the 5V standby voltage from the node power supply. The CM is also able to communicate through serial in either crossover or straight cable settings by configuring jumpers, and through a standard DB9 connector or a 5x2 0.1" spaced header.

Similarly to the CM1 and CM2 all the hardware, Development, and software information is provided, as well as detailed usage information.