First, SSH into the test bed you plan on using for the experiment. For this experiment, we use ORBIT's Sandbox 4. 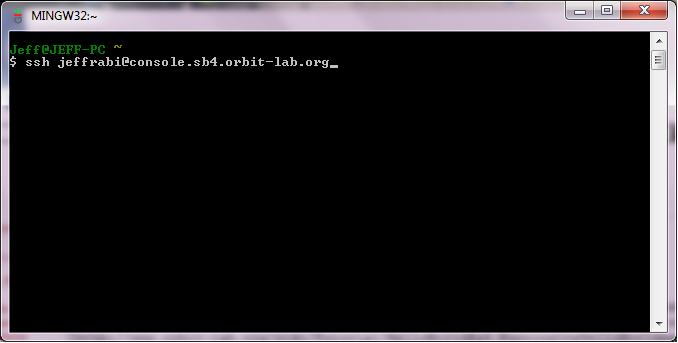 About the Base Station

WiMAX (related to and derived from WiFi) works by sending all data traffic through an ​Access Point called a Base Station. This is similar to how a cell phone connects to a cell tower. In fact, at one point WiMAX was used to provide mobile internet connectivity to cell phones! However, the WiMAX base station at WINLAB is special in that its operation settings can be changed to meet the needs of an experiment. This is good, because it permits tweaking of settings to conduct research. However, it also means that latest person to run experiments may have left the base station with settings that will make conducting experiments difficult. First, tell the base station to use default settings, and then reset it.

Interacting with the Base Station

The base station receives instructions from ​http get requests sent from the corresponding sandbox. For example, consider

Restoring the Base Station to Defaults

To restore the base station to defaults, run the following commands:

This is normal. It simply means that the base station has gone offline (while rebooting). 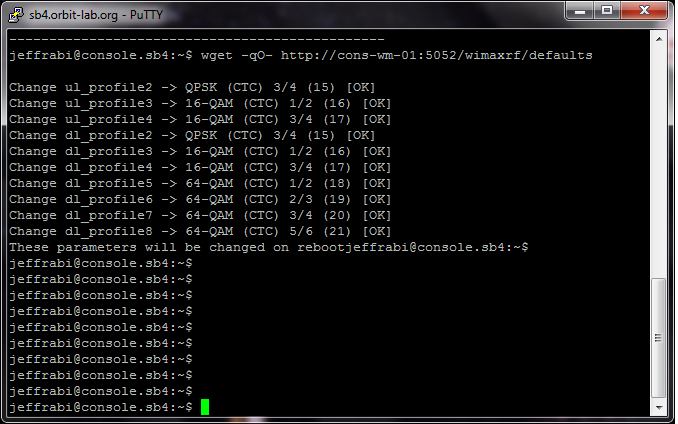 Much like it is recommended to reset the base station to default settings, it is also recommended to load up a "clean" disk image. This helps avoid conflicts with previous user settings. It can also save time manually setting up frequently-used properties.

You should assume that this command is whitespace-sensitive (do not include any spaces between the node names and the commas). 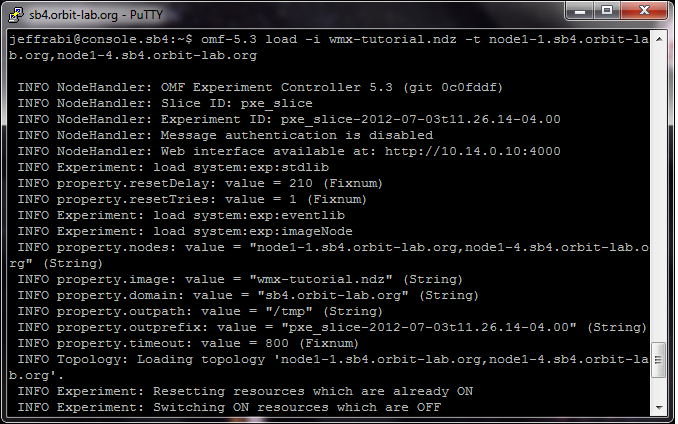 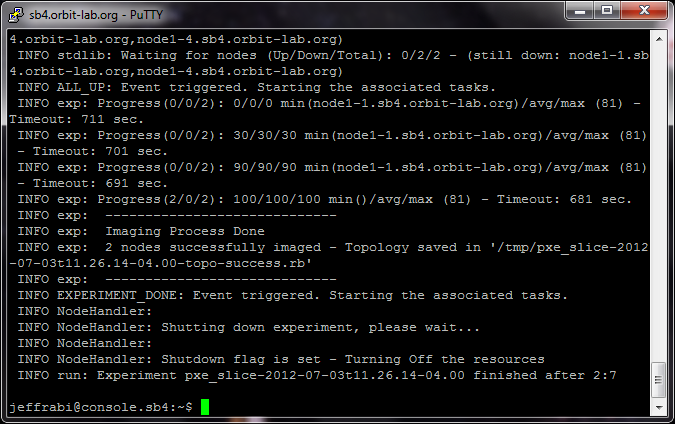 This process may take a few minutes. When it is complete, confirm the installation by SSH'ing into the nodes and checking that the settings loaded correctly.

SSH into the nodes, one at a time, to confirm that the settings loaded correctly.

If you get a message that says,

If this works, proceed to the next section. If not, here is some error-checking advice.

it may mean that your node is off after the imaging process. If so, you should turn it on by running the following command:

Sometimes nodes also 'hiccup' after imaging, and will deny connections. This can be worked around by turning the affected nodes off and back on as follows:

If you have successfully logged into a node with SSH, you will see the following prompt:

Check that the drivers loaded correctly using the lsmod command. The WiMAX drivers on this testbed are of the i2400 family.

If they aren't loaded, put them up manually:

The WiMAX daemon service should load automatically. Check that it is running by simply calling it:

The output should be:

Connect to the WiMAX Network

Next, use the WiMAX Configuration Utility (wimaxcu) to connect to the WiMAX network:

By this point, the drivers are loaded, and the network is connected. However, the WiMAX card hasn't been given an IP address yet. Below is the recommended IP address for node 4 on sandbox 4. (Alternate IP addresses are allowed, but require additional configuration at other stages of an experiment.)

Note that the wmx0 network card now has an IP address.

Repeat for Other Nodes

For the sake of brevity, we will not repeat the previous process at length for the other nodes. However, we will give sample instructions for node 6, and elaborate on some general rules.

For most of the sandboxes on ORBIT, the rule of thumb for assigning IP addresses is:

On the "outdoor" testbed, the rule is

and on the "grid" testbed, the rule is

Repeat the previous steps for other nodes. To test the connection between two nodes, use the ping utility, which sends packets at an IP address and checks for confirmation of receipt. Assuming that nodes 4 and 6 have already been connected:

Base Station IP's: Sometimes a previous experimenter has given the base station a different set of IP addresses to permit connectivity than the recommended defaults. When this happens, the base station will reject connections from the 'foreign' nodes. Some commands of interest are below. They follow standard base station command and syntax conventions.

RF Attenuater Matrix Couplings: Unique to sandbox 4, there is a hardware attenuator matrix which can physically weaken signals between the nodes of the test bed. Previous experimenters' values will be left on the matrix, and if they happened to set the matrix to a very high level of attenuation, it's likely that the affected nodes will be too attenuated to successfully transmit signals. Below are the conventions currently used to check and change the modulation between any pair of nodes.