This tutorial section is adapted from the tutorials at ​NYU Poly WITest lab and expanded from the more concise ​ORBIT adaptations done previously. As before, we will perform our experiment on Sandbox 4, providing some background information at each step. For more information, see the relevant documentation for each step at one of the source websites.

At this point, we will give a primer on OMF and some of the functions inside the experiment.

Experiments performed on ORBIT (specifically) and all GENI wireless test-beds are managed by what was once called the ORBIT Management Framework, now simply known as ​OMF. (For background information on frameworks, see ​Wikipedia.) Simply put, a framework provides programs which perform all the generic functions a programmer would otherwise need to code at a given layer to obtain functional applications. This includes programs that check various paths, run subprograms, collect data, check validity, sanitize inputs, and more. Together with its sister program, formerly known as the ORBIT Measurement Library (now known as OML), OMF is used to run experiments from start to finish.

But how is an experiment defined? At ORBIT, the aforementioned OEDL is used to mark up a script describing an experiment. Instead of having to manually define every subject and action, though, the framework (OMF) "knows" how to generically do most tasks. The experimenter simply uses OEDL functions and syntax to delineate a specific experiment. The script is then loaded onto a testbed and executed using OMF.

defGroup is a method which creates groups of resources (usually nodes), gives them a URI for later identification (first parameter), and identifies these resources by the second parameter (in OMF version 5.3, they are identified as above). The (optional) third parameter is a block argument.

This adds the iperf application functionality to the group. iperf is an application which measures connectivity by sending data packets between groups. To see a complete list of possible parameters and measurements available, examine the source code of the iperf wrapper applications.

The iperf application contains two types of functions: properties (parameters) and measurements (different data collection tools). Properties simply add various optional and required parameters to the iperf call. Measurements specify data to be collected by OML, and are the "interesting" part of the experiment.

setProperty is fairly self-explanatory. It simply configures individual parameters germane to the operation of iperf, as defined in the wrapper application.

app.measure collects the data and leverages OML to save them to an external service. A measurement type should be specified to ensure that data is collected properly.

Reset the base station to default settings, and then image the nodes, as before.

Now, turn the nodes on and launch the experiment!

There are a few problems which may arise during the course of attempting to run this experiment. Usually, they are the result of fragmentation of framework/operational code. Below are some errors encountered, and suggested solutions. 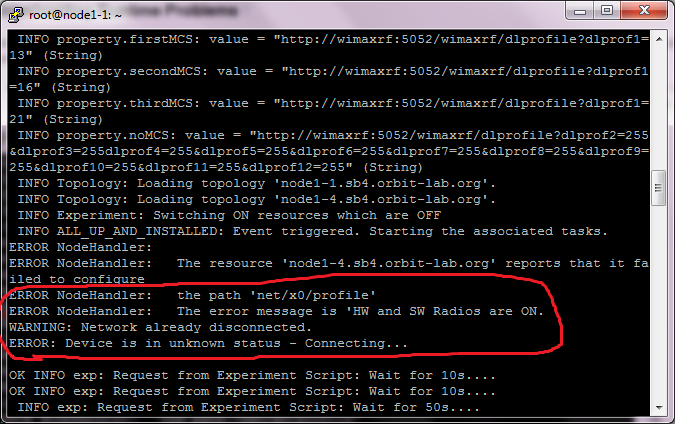 Data is collected during experimentation and pushed to a server using an experiment ID indicated during the initiation and conclusion of each experiment. This ID is important, as it is used to recover experiment results and even view them in real-time. (Server names vary with test beds. This server name is specific to ORBIT.)

To recover experiment data to the local machine, and using the experiment ID:

You're almost done. In order to get SQLite to recognize the database, it first must be told that the information is a database.

You can also view the results in a web browser by visiting the following URL:

Due to the highly experimental nature of ORBIT and its OMF and OML, it is possible that this experiment may eventually be broken by future design changes. Please bear this in mind.

If this experiment does not work for you, and the above troubleshooting suggestions did not resolve your difficulties, you may need to contact an administrator. Unfortunately, it is difficult to tell the difference between the system being down and simply misconfigured for an end user. Therefore, you should attempt to debug the experiment using the above troubleshooting tips to ensure that the error is not from the configuration.